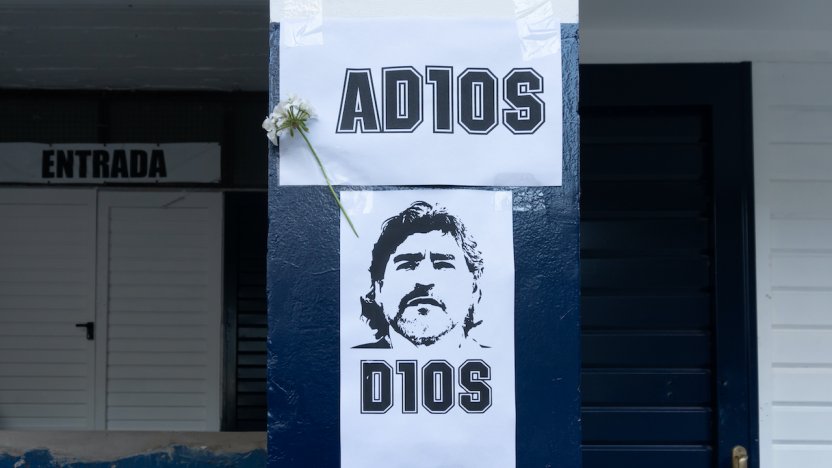 So synonymous is Diego Maradona's name with ‘soccer excellence’ that the name can't be used without his consent. That was the ruling of Judge Paola Gandolfi in the 2019 dispute between the luxury fashion house Dolce & Gabbana and Maradona, which reaffirmed the Argentine football legend's right to his name and image.

The story of a legend

Born in 1960 in an Argentinian slum, Maradona said he grew up with the ball at his feet. At the age of 24, he joined SSC Napoli, where he went on to become one of the most famous players in the world.

Passionate, charismatic, committed to politics and also religion, Maradona built his own myth through talent and charm. Considered one of the greatest of all time (G.O.A.T.) by many, the ‘genius' Argentinian is also forever associated with the ‘hand of god' quarter-final goal, which put an end to England's dreams in the 1986 World Cup.

In addition to collecting titles, the football star accrued several brands, including ‘Diego Maradona', ‘Diego Armando Maradona’ and ‘Diegito’, the nickname by which he is known to his friends and family.

There were also successful commercial enterprises, particularly in the food and fashion industries, where the player partnered with Puma for a limited edition range of sports shoes.

Falling foul of a champion

Nevertheless, during a Dolce & Gabbana fashion show in 2016, a model walked the runway in a distinctive blue jersey, featuring the name MARADONA and his iconic shirt number ’10', without his knowledge or authorisation.

According to the luxury fashion house, this was simply a tribute to his time at Naples. Maradona's lawyers did not agree, arguing that the only person who could use the name and image of such a famous person, and derive benefit from it, was that person themselves.

In her decision of 10 December 2019, Judge Paola Gandolfi took the footballer's side, finding that the name Maradona is associated with soccer excellence, and that such names cannot be used by third parties without the prior consent of the interested party, if the purpose is for commercial purposes.

As Dolce & Gabbana had not marketed or placed on the market any products featuring Maradona's name, the damages were set at 70,000 euros.

We have previously written, of the importance of brand value in football from both a club and individual player perspective, with players such as David Beckham, Cristiano Ronaldo and others, keeping close controls of the use of their images in merchandising.

The issue of image rights in football has also become topical recently, after Zlatan Ibrahimovic complained about the usage of his likeness in the FIFA 21 video game without his permission. The AC Milan forward stated on Twitter in November, that he was not 'a member of Fifpro’, adding: 'Somebody is making profit on my name and face without my agreement.’

While the outcome of that complaint remains to be seen, the Maradona decision certainly affirmed the importance of the iconic sportsperson being able to own the right to their own name, image and, therefore, legacy.