Nirvana is one of the most famous and influential rock bands in history, and the band claims that the smiley face has been licensed and marketed in relation to various activities and goods relating to Nirvana since 1992. 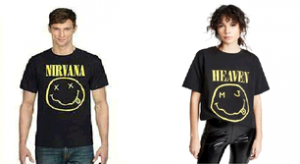 As can be seen from the image filed in the Central District of California lawsuit (right), there are many similarities between the Nirvana smiley face and the Marc Jacobs design, including the same black and yellow branding, smiley face with tongue, and wording above the face in a very similar font. There are some differences, such as the crosses of the smiley face eyes being replaced by the letters ‘M’ and ‘J’ and the word ‘Heaven’ used instead of the band’s name in the Marc Jacobs t-shirt.

In March, Marc Jacobs filed a motion attempting to dismiss the lawsuit, admitting that while the designs were ‘inspired’ by Nirvana concert t-shirts from the 1990s, they have been reinterpreted. The motion also contained an argument that the logo may not be owned by the band, given that the work was created by the deceased singer Kurt Cobain, and there is no evidence in the lawsuit to prove that the logo rights were transferred to the band.

The Nirvana image, while iconic, has previously been copied by many third parties, and it can be difficult for the copyright owner to take action against all such use without incurring significant fees. Pursuing larger fashion brands, such as Marc Jacobs, for infringement is often a more viable option, as it can also serve to inform other potential infringers that the rights holder is monitoring such activity and may take action in the future.

It will be interesting to see how the matter develops. If the counter-claim by Marc Jacobs over the ownership of the copyright is found to be true, Nirvana would not be the first company not to own core copyright elements of its branding. For example, Innocent Smoothies previously came across an issue when its halo logo was found to still be owned by the designers who created it; and, Dr Martens notably took action against a freelance designer who attempted to sell the designs they had created to a third party unrelated to the brand.

These matters demonstrate the importance of having good procedures in place to ensure that copyright is owned by the correct company. If a trademark or logo is designed by an individual in a group, or by a third-party designer, for example, it's important to ensure those rights are always transferred to the main company. Please contact us below if you have any questions or would like any support on setting up the appropriate copyright assignment process within your business.