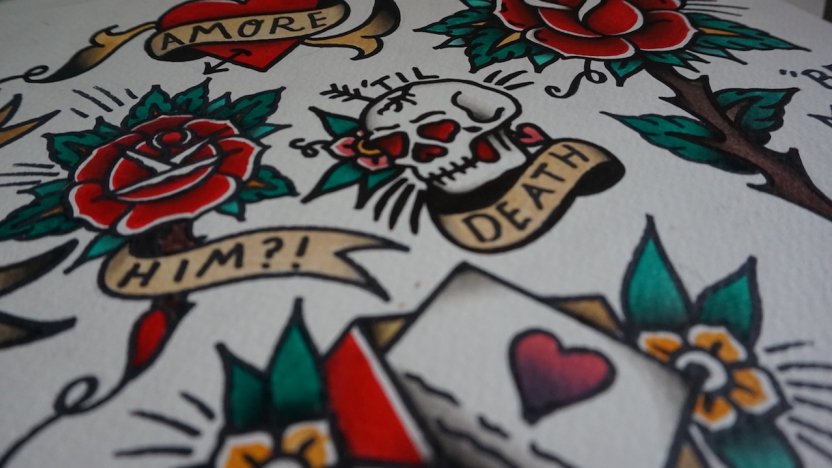 When it comes to celebrity tattoos, the story is always who's got one and where – but what about the artist who created the design? Alastair Rawlence redresses the balance.

All creativity has value, but not every business understand the implications of the IP that protects it – or considers the appetite of its creator for protection. This disconnect is particularly noticeable in areas that are still considered to sit outside the boundaries of ‘normal’ business; graffiti provides one example, tattoos another.

Ink in the mainstream

Fuelled partly by its enthusiastic adoption by rockstars and actors, body art is no longer considered as alternative or unconventional as it once was. Pick up a magazine or browse celebrity gossip columns online, and you will invariably read news of the latest ink designs adorning everyone from singers to sports stars. Many of the tattoo designs favoured by celebrities have trickled down to the high street and, quite probably, to a back, ankle, arm or leg near you. As with most forms of creativity, however, there is a thin line between imitation and infringement.

Inking a celebrity can provide the tattoo artist with a valuable opportunity to showcase their skills and raise their profiles. Commonly, however, the tattoo will become so associated with the body it adorns that few imitators or advertisers will consider the tattooist's IP rights when copying or taking inspiration from their designs. Such oversight may traditionally have been ignored in the once anti-establishment world of tattoo art. But today, this kind of infringement is sufficiently high-profile to grab the attention or the tattoo artist and lead to legal action.

It's a thin line

The high-profile dispute in the US between tattooist S Victor Whitmill and the studio behind the movie The Hangover Part II provides just one high profile example of a tattoo artist recognising the value of and need for asserting IP rights against unauthorised copying.

The tribal ink-job on the face of a main character in the film may have been made famous because it is the twin of a tattoo sported by former heavyweight champion Mike Tyson. but it was the tattooist's permission that the filmmakers needed in order to use it. While the two parties ultimately reached an ‘amicable’ resolution to the dispute, Warner Bros was reportedly so concerned when the legal claim was brought that it said in a court filing that the studio would digitally alter the facial design for the DVD release.

There is certainly enough precedent for Warner Bros to be so concerned. A US copyright infringement lawsuit stemming from an advertisement that focused on the tattooed arm of pro-basketball player Rasheed Wallace hit the US courts in 2005. The claim made it clear that Matthew Reed, the tattoo artist, had a right to assert copyright infringement based on that tattoo, even though Wallace argued that he’d helped to create the design by suggesting the initial theme as well as amendments to Reed's sketches.

Indeed, Reed's complaint was filed not just against Nike and its advertising agency (for copying, producing, distributing and publicly displaying Reed's copyrighted work without Reed's consent), but also against Wallace for contributory infringement. This was based on Wallace allegedly holding himself out as the exclusive owner of the tattoo to Nike and in the advert, which sees him describe and explain the meaning behind the tattoo.

More recently, the company behind the NBA 2K video game was sued for copyright infringement in the US over its allegedly unauthorised use of tattoo designs. Solid Oak Sketches, which claims to own some of the designs of the tattoos sported by NBA stars such as LeBron James, Kobe Bryant and Kenyon Martin demanded more than US$1.1 million for a licence to use the tattoo designs in the video game.

Another high profile case of tattoo-related infringement led Nike to announce that it was pulling a line of leggings and sports bras inspired by tribal tattoos from Fiji, Samoa and New Zealand, following an outcry and online petition by Pacific communities. Much of the complaint stemmed from the alleged insensitivity of the tattoo design's use, with members of the Samoan community protesting that the women's leggings used a design similar to the pe'a - a traditional tattoo reserved in their culture for men.

Meanwhile in Europe, a 2009 Belgian case helpfully brought into focus the distinction between the rights of the tattoo artist to reproduce their design and the rights of the person bearing the tattoo. The case highlighted that under Belgian law there is a difference between the copyright in the design of the tattoo and the copyright in the design applied to the body. In effect, in its ruling, the Court of Appeal in Ghent held that the tattoo artist who created the design had the right to reproduce the design on others, but had no rights to prevent the person to whom the tattoo had been applied being photographed and those photographs being disseminated.

With the exception of tribal tattoos based on an indigenous right or designs transferred to another party via assignment, IP rights in tattoo artwork will belong to the artist that created the tattoo, assuming it meets the requirements for artistic copyright. To do this, it needs to be ‘fixed’ (ie permanent) and ‘original’, although the threshold for the latter is fairly low.

As their tattoo body of work will invariably qualify for copyright protection, in theory there is nothing tattoo artists need to do to prove the subsistence of this right other than keep records of their designs and their creation dates. However, a tattoo design can also be eligible for trademark protection where it satisfies the requirements of a bona fide intention to use: for example use in marketing as part of a branded range of products. It may also function as a design right where the tattoo satisfies the requirement for novelty.

Indeed, as high-quality tattoo art is sophisticated and unique to the individual artist, tattoo designs can be used for a wide range of products, from crockery to fashion items, textiles and jewellery items. Any product requiring decoration may qualify. However, if the tattoo artist wishes to use a tattoo design as a trademark for products and services, such designs should also be protected by trademark registration. This is crucial for many tattoo artists as trademarks will enable them to build their business and reputation, and can be licensed to third parties for a wide range of products.

Any tattooist seeking to build a reputation for themselves or their studio should also seek relevant trademark protection for their business or studio name. Registering their personal name as a trademark is of particular importance, as the reputation of tattoo studios tends to lie in the tattooist's name rather than that of the company or studio name. Renowned tattooist Louis Molloy – the artist behind David Beckham's ‘Guardian Angel’ back tattoo – has his name ‘Lou Molloy’ protected as a plain word/signature via European trademark registrations, for example.

In Molloy's case, those trademark registrations cover the clothing. cosmetics, textiles and skincare sectors, and products bearing Louis's distinctive designs have been used for home furnishings. such as cushions, clothing (including T-shirts, sweatshirts and polo shirts) and knitwear designs for the likes of John Smedley. Louis also licenses his tattoo designs via his website and retails a range of body aftercare, ‘Forever Ink’.

More than a canvas

But what about the celebrities themselves? After all, they didn't choose the design in order to be a walking advertisement for the tattoo artist. The artist's creativity and skill apart, that tattoo exists because of the individual's taste and desire to be different or to commemorate someone or something, for example. Unsurprisingly, the canvas for that art may feel that they had something to do with making that design famous or, at least, that they had some involvement In its creation in collaboration with the tattooist.

If that's the case and a celebrity is having a custom design created by the tattooist that they may wish to exploit at any stage, they should take an assignment of the copyright from that tattooist, preferably at the time of commission. If they do not, or choose not to, they may find that advertising, packaging designs, promotional materials etc, featuring that tattoo might infringe the copyright, trademark or design laws that can protect the tattoo artist's interests in the tattoo – and the drawing, sketch or design that came before it.

Some tattooists may not be aware of the IP rights that exist in their tattoos or may choose to overlook any infringement because of the return they get in terms of exposure for their work. However, as recent cases have shown, the tide has begun to turn. Future advertisers overlook those rights at their peril.