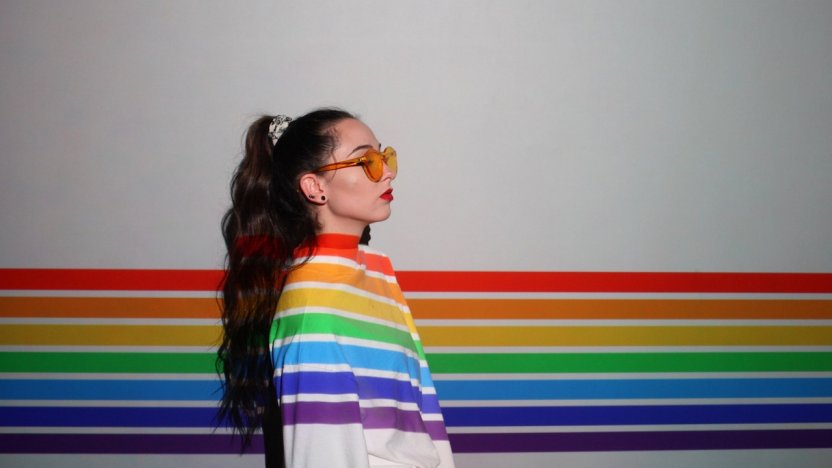 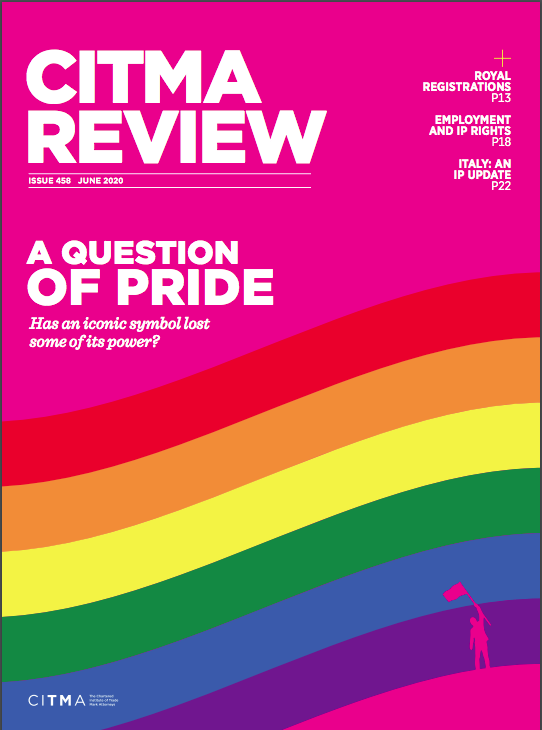 This article first appeared in the June 2020 edition of CITMA Review, the magazine of The Chartered Institute of Trade Mark Attorneys. For more information, please visit citma.org.uk.

Support for diversity and inclusion or simply opportunistic 'rainbow-washing'? What does corporate use of the iconic PRIDE rainbow mean for the credibility of an iconic symbol?

It’s impossible to miss the rainbow flag during the annual Pride festivities, but these days this colourful banner is as likely to be found alongside a corporate logo as it is in the arms of a flag-waving LGBTQ+ activist.

Whether you consider this a welcome form of support for diversity and inclusion or simply opportunistic 'rainbow-washing' on the part of some major brands, the adoption of the multi-coloured flag raises a number of interesting IP issues about ownership, appropriation and free use.

The evolution of a revolution

The history of the rainbow flag can be traced back to the 1969 Stonewall riots in New York City. That incident led directly to the birth of the modern LGBTQ+ movement and the election of Harvey Milk to public office in California – one of the first openly gay people to achieve this in the US. It was Milk who encouraged his friend, the gay activist Gilbert Baker, to develop the symbol. Baker’s first rainbow flag design featured prominently at the San Francisco Gay Freedom Day Parade in June 1978, just a matter of months before Milk was, tragically, assassinated.

Why a flag at all? Baker had reportedly been inspired by the US bicentennial celebrations, at which the Stars and Stripes had featured prominently. He wanted to imbue his new symbol with that same feeling of power, but give it a joyous, colourful and positive twist. As he wrote in his memoir, Rainbow Warrior: “At this point, the pink triangle was the symbol for the gay movement. But it represented a dark chapter in the history of same-sex rights [...] It functioned as a Nazi tool of oppression. We all felt that we needed something that was positive, that celebrated our love.”

In 2015, Baker told New York’s Museum of Modern Art (to which he gifted the prototype rainbow flag for its design collection) that he had hit upon the flag as a symbol because “flags are about proclaiming power”. He added: “It is not just a logo – it functions in so many different ways”. This is also true from an intellectual property perspective, and there are barriers to protecting a symbol such as a flag if it consists of or contains an emblem that has protection under an international agreement.

The rainbow flag is not protected under such an agreement, but it does qualify for copyright protection as an original artistic work. That said, Baker purposefully never enforced his copyright in the flag, as “he wanted it to be owned by everyone”, according to Charley Beal, Baker’s friend and Manager of Creative Projects at the Gilbert Baker Foundation.

Baker did, however, consult an attorney to block an early attempt by an LGBTQ+ advocacy organisation to register a US trademark for the rainbow flag. Baker reportedly told Matt Coles, the attorney who represented him, that he had “created the flag for everyone and wanted it to remain free for public use”.

Free, but at what cost?

Whether or not a work is 'copyright-free' largely depends on the will of its creator, and Baker’s free-for-all attitude certainly helped the use of the rainbow flag to spread throughout the US and then worldwide, supporting the LGBTQ+ movement’s growth and helping to foster wider acceptance of the community. There are now countless 'copyright-free' images of it available online, and the flag has become near ubiquitous in its use to celebrate both Pride events and the LGBTQ+ community in general.

However, from an IP perspective, such an approach does not come without risks. Here, a number of parallels can be drawn with other iconic copyright-free symbols, such as the widely used 'peace symbol' designed by British artist Gerald Holtom for the Campaign for Nuclear Disarmament (CND) in 1958. As with the rainbow flag, the symbol has been massively exploited over time, on T-shirts, posters, jewellery – pretty much everywhere – with the danger that its intended significance will or may already have been lost.

A modern parallel can be drawn with the 'extinction symbol' logo affiliated with the international movement Extinction Rebellion. Use of the symbol (an hourglass contained within a circle) has been relatively limited so far, probably because of the controversy surrounding the movement’s focus on civil disobedience and disruptive activity. Of course, the same could have been said of the peace symbol in the ’60s and ’70s, and the rainbow flag itself in the early days of the LGBTQ+ rights movement.

Commercial use: harm or help?

These days, the rainbow flag has also been co-opted by global brands to piggyback on the movement’s success and draw the 'pink pound'. This has become known as 'rainbow-washing', a term coined to name and shame those companies that overstep the thin line between supporting the LGBTQ+ community and exploiting it for marketing purposes. In particular, it is levelled at those organisations, governments and businesses that don’t support LGBTQ+ communities at any other time of the year, but happily redesign their logo or products to feature a rainbow flag in the month of June to benefit from the association.

To become an official partner of a Pride parade, brands have to be able to demonstrate to the organisers that they support the LGBTQ+ community throughout the year, but anyone is free to use the rainbow flag in their own advertising at any time.

It’s not hard to find examples of brands that use the rainbow flag or its colours, but it’s not always easy to tell if they’re doing this out of genuine support or simply because it looks good and will make them money. Take, for example, Disney’s 'Rainbow Disney' collection, which includes a range of clothing and accessories such as rainbow Mickey Mouse ears. The company also hosts its own Pride event at Disneyland Paris, called 'Magical Pride'.

Then there’s Primark, with its 'Feeling Proud' collection, through which it also markets a range of clothing and accessories. Costa Coffee has even previously produced rainbow-coloured cups for Pride.

Meanwhile, other companies have opted to feature the rainbow flag in their logos, including YouTube, Spotify and Coca-Cola. Sportswear giant Nike went one step further in 2019, partnering with the Gilbert Baker Estate to design a 'BETRUE' rainbow-themed clothing range.

The flag motif is easily applied, so how do you draw the line? At what point does using it become simply tokenistic or trivialising? How about when it reaches mouthwash? In 2019, Listerine bottles sported a rainbow flag as part of Johnson & Johnson’s CARE WITH PRIDE® initiative, which wasn’t received well by some members of the LGBTQ+ community. Or what about a sandwich? The M&S rainbow-branded BLT sandwich also attracted criticism, despite the fact that both organisations donated to Pride-supporting charities.

Here, parallels can also be drawn to the backlashes against BrewDog and its “Pink IPA”, launched to support International Women’s Day in 2018, and Pepsi, which was accused of co-opting imagery from the Black Lives Matter movement in its 2017 advert featuring model Kendall Jenner.

In these instances, the movement itself didn’t have to take legal action against the brand owner, as the court of public opinion acted on its behalf. But it does occasionally become necessary for campaigning organisations to threaten legal action where they believe a brand owner has overstepped the mark. Such was the case in 2014, when CND threatened to take Unilever to court over its use of the peace symbol in a marketing campaign for Lynx deodorant.

This is the dilemma that faces any campaigning organisation: should it attempt to control and enforce the symbols that represent its interests or allow them to enter the public domain?

While it is too late for the organisations behind the rainbow flag and other such copyright-free campaigning symbols to act, any organisation that creates a logo for campaigning use would be wise to take advice on IP protection.

In general, such symbols will qualify for copyright protection and, in theory, already have a degree of enforceability. The problem comes in enforcement itself, as attempts to enforce copyright ownership can be time-consuming and expensive.

If the symbol has been inappropriately copied by a third party, then a policy of publicly 'naming and shaming' might be more effective than legal action per se, especially if the third party is trying to exploit the image for profit.

Setting clear guidelines as to how and when the symbol can be used can help to avoid dilution and adverse appropriation, but ultimately the more popular and visible the symbol becomes, the harder it will be to control third-party usage. In many ways, ubiquity is the source of these symbols’ strength, but it is also ultimately a weakness.

By relinquishing any IP control, these symbols and their messages have the potential to spread widely, but this comes with the risk that once-potent images can lose their uniquely persuasive and community-building power.

Flight of fancy: The rainbow flag over time