Professor Daryl Lim, keynote speaker at Novagraaf’s January event ‘An Evening at the Embassy’ in Washington, DC, on the importance of fostering understanding and dialogue between IP stakeholders. 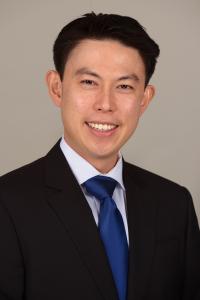 It is fitting that Professor Lim first discovered IP while on a year abroad from his undergraduate law studies at the National University of Singapore (NUS). His scholarly interest in the similarities and differences in national laws and practices has become a feature of his already distinguished career.

Back then, he was the first of two law students to be offered an opportunity to spend the third year of its four-year undergraduate programme at Stockholm University’s Faculty of Law. He chose European IP Law as one of three electives during his time in Sweden and, while he admits he originally chose to pursue the field because he received his best marks in the topic, he found on returning to Singapore that IP held a unique draw there, too. “I could see that the field was strongly influenced by international currents of jurisprudence by virtue of Singapore’s open economy,” he explains. In other words, a melting pot for different national IP laws and systems to collide.

On graduation, Professor Lim took a scholarship at Singapore’s newly established think-tank, the IP Academy, to pursue a Masters on the interface between IP and competition law; in particular, examining how the exercise of rights under copyright law might be impacted by the then-newly enacted competition law, which Singapore had agreed to introduce as part of its Free Trade Agreement with the US.

He later honed his craft in private practice at Allen & Gledhill LLP, one of Singapore’s largest law firms, where he worked on litigation and arbitration matters, as well as advised clients on IP and technology issues. However, realising his “passion lay in understanding and developing legal doctrine and policy”, he moved back into the research field, first at the Max Planck Institute for IP and Competition Law in Munich, Germany, and then at the Queen Mary IP Research Institute in London, UK, two of Europe’s top-most research think-tanks.

To round off his studies, he obtained a graduate law degree from Stanford Law School, US, where he also received the Franklin Family Fellowship and the Ewing Marion Kauffman Foundation Research Grant for research on the US patent law doctrine of patent misuse. From Stanford, he moved to Fordham University School of Law as its IP Institute’s inaugural Microsoft Teaching and Research Fellow.

He is currently IP Director at the Center for IP, Information & Privacy Law at the John Marshall Law School in Chicago, one of the founding institutions for IP education and research in the United States.

A frequent speaker on antitrust and patent law, Professor Lim’s foundational principle is that “IP doctrine and policy are only useful if informed by real world practice”. He says this belief has been reinforced over the course of his career, most notably in his time at Fordham, which organises what the World IP Organization (WIPO) Director General Francis Gurry called the “Davos of the IP World”, bringing together the “who’s who” of the IP profession for a two-day conference each year.

In November 2017, he was one of the delegation of US representatives from national and state bar associations to meet with European Patent Office (EPO) President Benoît Battistelli, EPO Boards of Appeal (BOA) President Carl Josefsson and senior staff at the 33rd Annual US Bar – EPO Liaison Council Meeting. It’s an important opportunity for both sides to exchange views on policy, as well as procedural and substantive matters relating to EU and US patent law and practice.

“The meetings gave us front row access to the EPO’s recent achievements and its role in shaping European patent law,” comments Professor Lim. “This is a group that has influenced the development of European patent policy and the US-EU understanding of patent law in significant ways.”

“To be able to contribute in a small way to fostering understanding and dialogue between stakeholders, and in doing so, move past parochial interests, ignorance and other points of gridlock, is something that inspires me every day.”

As an example, he references the “stunning growth and influence” of the European patent system, including the EPO patent prosecution highway (PPH) programmes, the Patent Cooperation Treaty (PCT), IP5 and trilateral cooperation.

“The EPO interface with its US clientele has also played a key role in its success, and the meeting provided insight into the top applicants, leading fields of technology, where US applicants stand relative to the rest of the world, and EPO outreach activities in the US,” he explains.

Future challenges were covered too, in terms of the priorities and outlook for the EPO in general; the technical and legal steps required to implement the Unitary Patent system; hurdles to overcome in the patenting of biotech inventions; and the need to better structure or reform the Boards of Appeal.

It is Professor Lim’s experience that “the arc of IP law and practice tends toward complexity”. Why? “Because business needs shape the law, and [presently] those needs reflect the evolution of the global economy toward one that is interlinked and technologically driven. Supply chains and markets increasingly cross national boundaries, requiring savviness at every level – political, cultural and economic – at a scale never before experienced in the history of civilisation.

“IP is an area that touches our lives every day,” he notes. “From entertainment to healthcare, from the food we eat to the gadgets we use. There is no area of the law which has more contemporary significance, and which attracts a more cosmopolitan group of intellectually curious group of legal professionals than IP. To be able to contribute in a small way to fostering understanding and dialogue between stakeholders, and in doing so, move past parochial interests, ignorance and other points of gridlock, is something that inspires me every day.”

IP law also increasingly overlaps with, is informed by, or limited by other laws. He gives as example the case pending before the US Supreme Court on whether inter partes review (IPR) proceedings before an executive agency tribunal are constitutional, or whether the adjudication of patent validity must take place in Article III federal courts.

“The IP-competition overlap is also evident in pharma pay-for-delay cases, as well as tech cases involving fair, reasonable and non-discriminatory terms (FRAND) disputes,” he adds. “The next iterations will involve biologics and the Internet of Things (IoT) respectively.”

Other hot IP topics on Professor Lim‘s radar include judicial independence and the Patent Trial and Appeal Board (PTAB), the future of trademark law prohibitions after Tam, separability in copyright law after Star Athletica, patent exhaustion after Lexmark, and the role of US leadership in the Trump era. “It is an exciting time to be in IP, and I believe that the best times are yet to come,” he concludes.

Professor Daryl Lim was the keynote speaker at ‘An Evening at the Embassy’, an event hosted by Novagraaf in Washington, DC on 25 January 2018.