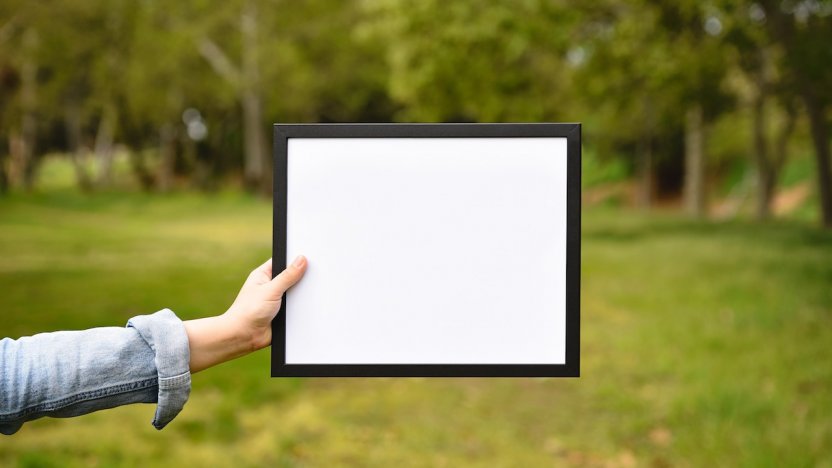 You can’t escape memes on social media these days, so it’s no surprise to find that corporations are beginning to get in on the act.

A meme is generally an image, animation or video that captures an activity, concept, song, catchphrase or topical issue, and is shared on the internet, typically on social media. Their use has grown exponentially in the past decade, so you’re unlikely not to have seen one. 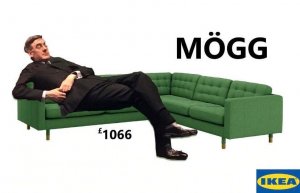 are to create. Take a photo – for example, of Jacob Rees-Mogg lounging in the Houses of Parliament – doctor the image and/or add some wording (see right, source: The Tab) and voilà, you’ve created a meme. To make the process even easier, you can find plenty of tools to help you create them online such as memebetter.com/generator.

Recurring memes, such as ‘Socially Awkward Penguin’ (see below), ‘Evil Kermit’ or ‘Grumpy Cat’, are good examples of why this internet phenomenon has become so popular. They are funny, shareable, relatable, easy to read, familiar and to the point; and, like all forms of creativity, there is IP in them too.

What are the copyright implications?

Copyright gives the creators of artistic works the rights to control the ways in which their materials may be used. The rights include broadcasting, public performance and, most importantly, copying and adapting. The creator has the right to be identified as the author and to object to distortions of his work.

When someone superimposes wording across an existing photograph, this is likely to constitute copyright infringement, as it is making a derivative work and copying. However, it’s not always possible to identify the source of the original image.

What about copyright exceptions?

In the UK, the right to parody is covered by the UK’s Copyright and Rights in Performances (Quotation and Parody) Regulations 2014. In October 2014, the UK implemented the EU Copyright Directive and amended the Copyright, Designs and Patents Act 1988 to add a new Section 30A (Caricature, parody or pastiche). This says:

In other words, ‘fair dealing’ (i.e. for the purposes of non-commercial research or study, criticism or review or reporting of current events) provides an exception to copyright. It does not provide such an exception for commercial use however.

Who owns copyright in a meme?

Copyright ownership is likely to include the owner of the picture and the person who created the meme using that picture.

These days, most companies know of the risks of using a picture without permission and, if they do not, they will soon become educated of the need to organise permission first. Large stock photo agencies use automated software to identify images that appear to have been used without the appropriate licence fees, which they swiftly follow-up.

One of the best-known memes, the Socially Awkward Penguin 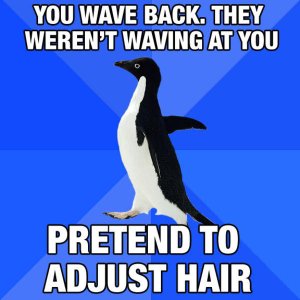 (see right, source: knowyourmeme.com) has been the subject of numerous copyright actions. The picture of a penguin on a blue background is superimposed with text describing socially-awkward scenarios. However, the original penguin picture is the property of National Geographic, and Getty Images has reportedly pursued and settled multiple infringement cases involving the meme on its behalf.

Using a meme without permission can also involve a substantial risk, and it is worth trying to track the owner of the meme to avoid any IP property issues. However, it can be very difficult to track, or indeed prove that you are the original author when something that is shared and modified by millions of people. Sites such as knowyourmeme.com can help, as it specialises in tracking down memes and the stories behind them, sometimes right down to the creator, artist or photographer.

There is a real difference between someone adding to the ‘culture’ of memes and someone attempting to be opportunistic and monetise them. If you are just sharing a meme in a personal capacity on social media, then you will probably be ok. Most creators are happy about their newfound meme status and are unlikely to object to non-commercial use of their work.

There are exceptions to this of course. Over the years, Constantin Film has issued a number of takedown notices over parodies of its 2004 film Downfall, in which ‘Adolf Hitler’ rants about a range of topics from his bunker. YouTube was compliant with a number of takedown requests, but it didn’t take long for new versions to spring up.

Using a meme to market your business

Companies should remember that IP laws, including those of copyright, will apply to social media in the same way as other fields, and what can be acceptable for an individual for the purpose of sharing a funny meme with friends is not going to be seen as acceptable for companies looking to make a profit.

If the use of an image is directly or indirectly related to your business or a commercial endeavour, it is important to first make sure that you have the appropriate licences in place for commercial use, and to check the terms of any free stock photo libraries.

Even when such rights are in place, however, it is wise to be wary. The creation of new memes in marketing can be a bit of a minefield, especially if companies are using existing copyright-protected media to create new memes. If the use is commercial, it is much less likely to be seen as ‘fair’ and also could be seen as damaging to the original creator’s reputation. There are also advertising standards and comparative advertising, not to mention privacy and image rights, to consider.

However, it does work well for some brands, as recently exemplified by 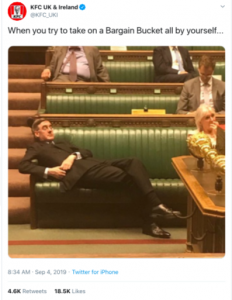 KFC, which objected to the Conservative Party’s recent anti-Corbyn chicken meme, and responded by issuing one of its own that was arguably much better received (pictured right, source: Twitter).

Given the fast paced and fickle nature of the internet, many memes are fleeting and will have a very short lifespan. However, when companies or individuals have requested removal of memes, the action appears to spawn new parodies popping up. Downfall spoofs continue to be created, and Axl Rose of Guns N' Roses fame has found that his objections to mean-spirited memes about his weight gain have only made things worse.

Brand owners may find that while it may be difficult to control or limit a meme, encouraging its use or using counter-memes to limit any potential damage could prove beneficial and help to strengthen the relationship between brands and their target audiences.

For additional questions or advice on copyright or the commercial use of memes, speak to your Novagraaf consultant or contact us below.