A recent spat over a recipe image used on Instagram highlights the importance both of clearing images for use before posting, and of protecting your own images using copyright symbols and watermarks, as Claire Jones explains.

Employees responsible for social media channels, such as Twitter, Instagram, Facebook and Pinterest, should be provided with at least a basic training in IP if they are to avoid risking the damage that can come to a company’s reputation from posting images or other protected content without permission.

The result of not doing so can be a high-profile spat with the image’s original owner, as posh pasta subscription service Pasta Evangelists recently found to its cost. It was called out by Miguel Barclay, better known as the £1 Chef, who spotted a picture from one of his cookbooks on Pasta Evangelists’ website and social media feed, and promptly pointed it out to his 225K Instagram followers (@onepoundmeals): 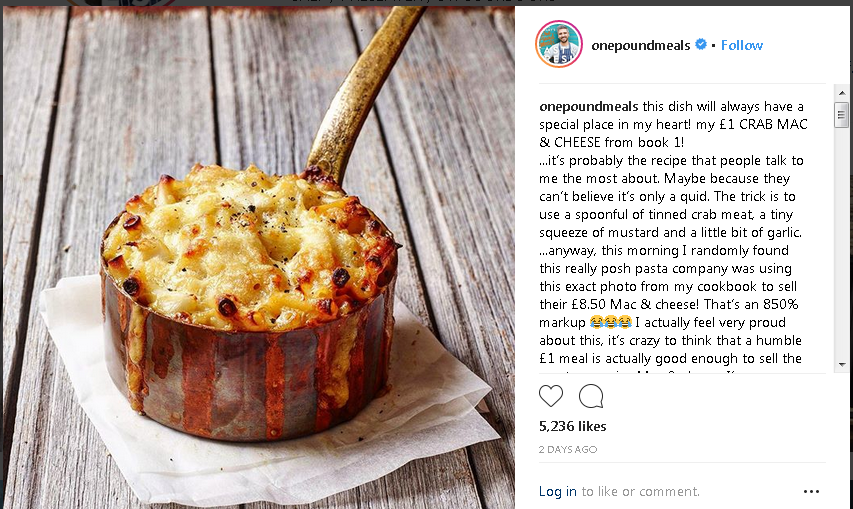 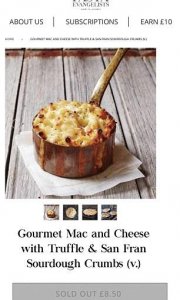 Pasta Evangelists was founded in 2017 by chef Prue Leith and food critics Giles Coren and William Sitwell. The appropriated image was of Barclays’ popular crab macaroni cheese recipe, as featured in his first book. It appeared on the Pasta Evangelist website and Instagram feed to illustrate the company’s ‘ultimate macaroni cheese’, with a price tag of £8.50 for the accompanying recipe box (see left).

While Barclay did not contact Pasta Evangelists directly, the company was contacted by many of his followers. The company reacted promptly, removing the image and posting a public apology (see right). 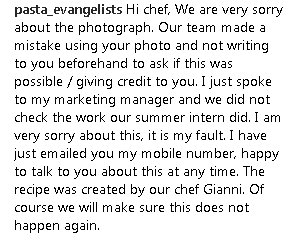 Barclay has always maintained that all of his meals and recipes are cooked and photographed by home. Accordingly, he will have acquired copyright in the images as artistic works, and any third party wishing to use them would need permission from Barclay himself before copying the image or sharing it on the internet. Besides infringing Barclays’ copyright, the company is also potentially infringing his ‘moral rights’ for not naming him as the author of the copyright.

The use of the image by Pasta Evangelists is unlikely to fall into one of the ‘permitted acts’ that are exceptions to copyright, as the image is being used for commercial purposes.

There are various courses of action that could be taken by Barclay against Pasta Evangelists, including commercial arrangements such as requesting a licence fee or court proceedings. However, court cases can be very expensive and time consuming. Barclay has handled the matter amicably and does not appear from his Instagram stories to be considering taking the matter further, being flattered rather than offended that a recipe he created for £1 could be used to illustrate a recipe retailed at £8.50.

Lessons to be learned

Nonetheless, there are a number of lessons to be learned on both sides of this food fight:

The spat is also a good reminder that social media can sometimes be a more powerful tool than formal legal proceedings; not only did Barclay and his business get a ton of free publicity, he also received numerous plaudits for his handling of the issue, which just makes him look even more popular.

On the flip side, Pasta Evangelists came up against numerous criticisms, including disappointment that not only did they use another person’s image without permission, but also that the images posted by them are not actually images of the food/recipes that they are selling. As a relatively new business, such a small mistake can cause significant detriment, even without taking into account any payment that could/should be made to Miguel Barclay.