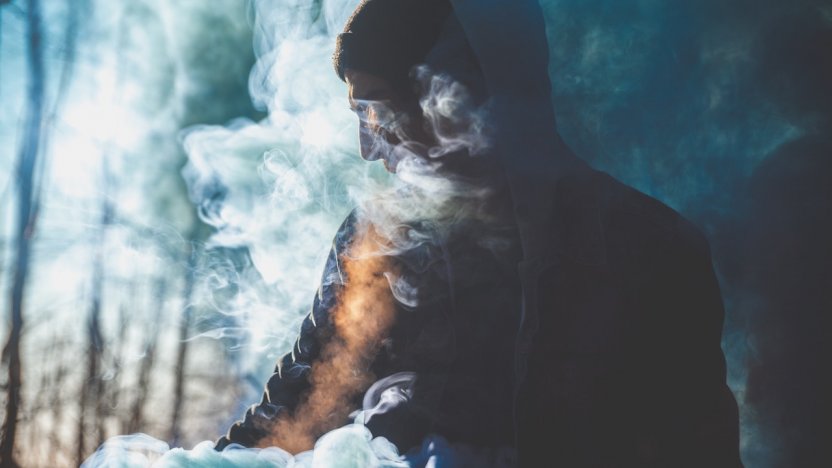 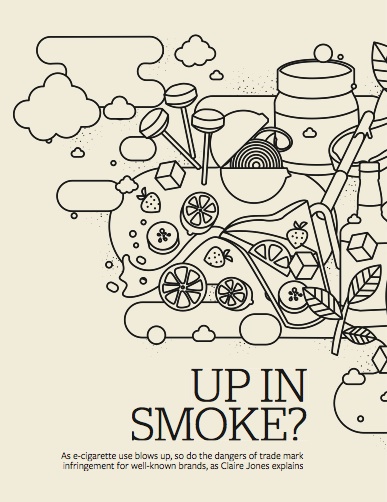 This is an updated version of an article first published in the May 2017 issue of CITMA Review, the journal of the Chartered Institute of Trade Mark Attorneys (CITMA).

As e-cigarette use grows, so do the dangers of trademark infringement for well-known brands, as Trademark Attorney Claire Jones explains.

E-liquids have taken hold in the UK at an astonishing speed, with vape shops offering a dazzling array of flavoured products popping up on nearly every high street. But, whether by ignorance or design, many e-liquid products piggy-back on the familiarity and reputation of well-known consumer brands.

From a consumer’s perspective, the ability to go into a vape shop and purchase a flavour named after a favourite soft drink or confectionery makes absolute sense. Selections might be made based on nostalgia (perhaps the taste of an ideal childhood breakfast involving a hazelnut and chocolate spread) and brand reputation, but do these e-liquid businesses have the right to use those brand names? Have they licensed the recipes and trademarks, as current practice would suggest? Overwhelmingly, the answer to these questions appears to be no.

The modern-day e-cigarette was first launched in Beijing in 2004 by a Chinese pharmacist named Hon Lik. The battery-powered devices are designed to simulate the effects of smoking by heating a nicotine liquid into vapour that is then inhaled by the user. The liquid, which contains propylene glycol, varying levels of nicotine and flavourings, is known as e-liquid or e-juice.

Global use of e-cigarettes and e-liquids has grown exponentially in recent years, and the promotion of such products, especially via the internet and high-street vape shops, is on the rise. Numerous e-liquid strengths and flavours are available from a range of sellers, all of which are in competition with each other to grab a share of this increasingly lucrative market.

As the base liquids are available in numerous flavours – including confectionery and soft drinks – there is rising concern that e-cigarettes are attracting a younger, non-smoking audience, rather than acting as a nicotine-replacement therapy for existing smokers, as they were originally marketed. For brand owners and IP practitioners, however, there is another concern: trademark infringement.

Common categories of e-liquid flavour include sweets, foods, drinks and cocktails, which are sold alongside the “original” tobacco- flavoured liquids. This can cause issues for brand owners in these sectors. Often, they do not have trademark registrations in class 34, covering tobacco and tobacco-related products, such as e-liquid – and they may not want their brands to be associated with such products.

Even a quick internet search will bring up sites selling e-liquids that are also using registered brands or images of identical/similar packaging to sell their products. Some examples from easily found web shops include ‘Snickers’, ‘Skittles', ‘Kahlua’ and ‘Nutella’ e-liquids.

If a company selling e-liquids markets its goods under a brand name, what can be done?

Without a trademark registration, it is not possible for the brand owner to claim trademark infringement on the basis that the goods are identical or confusingly similar. Therefore, any infringement claim would need to be based on reputation, unfair advantage or detriment under s10(3) of the Trade Marks Act 1994:

“A person infringes a registered trade mark if he uses in the course of trade in relation to goods or services a sign which (a) is identical with or similar to the trade mark, where the trade mark has a reputation in the United Kingdom and the use of the sign, being without due cause, takes unfair advantage of, or is detrimental to, the distinctive character or the repute of the trade mark.”

A mark has a “reputation” if it is known either by the public at large or by a significant part of the public concerned by the product or services covered by that mark, and if there is a link with the mark. If the infringing mark calls the earlier mark with a reputation to mind, that is tantamount to the existence of such a link in the mind of the average consumer.

An alternative (in the UK) would be for a brand owner to bring an action for passing off, a common-law action that provides protection against misrepresentation of a trademark and the damage that can subsequently be caused.

However, the responsibility of proving reputation for the purposes of infringement or passing off can be burdensome and expensive for brand owners who simply want to prevent their brand being used in relation to tobacco/nicotine products, such as e-liquids. Not only will there have been significant investment in the creation of such brands, but also they may include family-oriented products, and links with tobacco replacements can be seen as detrimental to the ethos of the brands involved.

In the US, Wrigley (Skittles and Starburst), General Mills (Cinnamon Toast Crunch), Ferrara Candy Company (Fruit Stripe) and Girl Scouts of the USA have all taken action against trademark infringement in this area, and the number of lawsuits relating to e-liquid flavours in the US is growing. In its complaints about trademark infringement, Girl Scouts of the USA noted the questionable ethics of selling flavours based on products aimed at the youth market.

In the UK, energy-drink company Red Bull took similar action against third-party use of the Red Bull brand in connection with the sale of unauthorised e-liquids in 2015. Red Bull issued proceedings at the IPEC for trademark infringement against thevapourplanet.co.uk and its sole director. The action was successful, and the Court granted an order restraining the Defendants from infringing Red Bull’s rights and ordering them to pay Red Bull’s costs (Claim No. IP.2015.000119).

As brand owners and IP practitioners know all too well, trademark registration is only the first step in the effective use and protection of a chosen brand, company or product name; these assets also need to be monitored for unauthorised and potentially damaging use.

The starting point in any e-liquid infringement action will generally be to send a cease-and-desist letter to the infringer, informing it of a brand’s rights/trademarks and requesting that the infringing products are removed/rebranded. Further action can then be assessed in light of the response received (if any). If a company is receptive and removes the infringing mark, the costs of infringement or passing off actions can be avoided. Remember also that, if the e-liquid companies use platforms like eBay and Facebook, such websites have in place protection measures to take down infringing products quickly and easily.

As a general rule, the earlier trademark infringement or misuse is identified, the easier it is for a company to enforce its trademark rights. Early detection helps in identifying and considering the level of risk (and in which markets), and allows brand owners to amass a portfolio of evidence of misuse and use it in action against infringements. Here, online trademark watching also plays a crucial role.

If a company owns a sizeable portfolio and trades globally, it may not be possible or cost-effective to watch every trademark in every jurisdiction. Where that is the case, it is generally advisable for the brand owner to focus its efforts by identifying and prioritising core brands and jurisdictions that warrant complete protection, in contrast to the “nice to have” or secondary brands. The same applies, of course, to markets, and it is here that infringing use by e-liquid providers must be assessed for risk and impact on a brand and its reputation (find out more: 'The how and why of trademark watching').

Interestingly, Trading Standards in the UK became is getting involved in a number of e-liquid disputes, removing brands and packaging from the market that look like children’s sweets and other well-known food brands. While this is clearly good news, these actions were taken on the basis that non-food products cannot resemble food, and that the packaging did not contain adequate labelling warning of the harmful effects of certain chemicals. However, it does provide potential an additional avenue for brand owners to explore.

At present, e-liquid companies appear able to sell products with infringing names without notable repercussions. As more brand owners take action, however, the use of infringing names is becoming less attractive. Incorporating vaping websites and sales channels – including social media and auction sites – in trademark watching strategies will help brand owners gather the evidence needed to battle this growing source of trademark infringement, and also educate the vaping market against launching infringing flavours.